Who are the project leaders in Malawi, André Oudhuis and Paulien van Musscher? 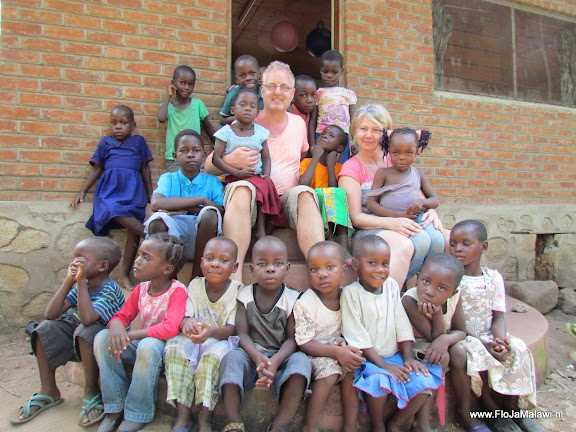 These two people are kind, easy going and friendly  and socially concerned. Living in the centre of Alkmaar, the major cheese city of the   North Holland until 2016.

André and Paulien were successively born in 1963 and 1965, and have all sorts of skills and different experiences in profit and non-profit organizations.

After his graduation  in a study in Economics, André started working in the field of IT. He has a broad knowledge of computors  and the internet.

For several years he worked in the world of entertainment and promotional gifts. He earned his  living working for a large catering company for a while. He also started his own business and became an experienced manager in the banking and insurance business/company. André is an easy talker, and with his amusing, witty own sense of humour he knows how to create a good atmosphere. He likes to take action and loves new things. People see him as a strong and inventive person, who can be a little impatient every now and then.

Paulien started her career as a nurse. During a period of more than fifteen years she gained experience in practically all fields of healthcare. After that she worked for an agency called ‘Start’, she learned how to train employees, and to provide training and coaching programs for various reintegration companies. During her last ten years in the Netherlands she worked as Head (of) Training/Education for the same banking and insurance company like her partner André. Paulien can be characterized as a social team player. She has her own ideas and is open-minded and creative. She’s fond of writing, loves adventure and other cultures, and her main motive in life is to empower her environment with sustainable added value.

With this range of activities André and Paulien complement each other well. They fell in love. They both were keepers at Handball Club Kolping in North Holland. The bonus result of this good match is the large group of dear friends who have remained loyal to them over the years, alongside a powerful social network.

Why did André and Paulien start working for the FloJa Malawi Foundation?

“The people who know us were well aware that we enjoyed a very comfortable life in the Netherlands. We both had a good job, a beautiful home, a large group of dear people around us and there was always a nice trip or interesting hobby to fill our days with. Inspired by other cultures and desires of people, we used many of our holidays to discover new countries.

“But even so, deep within, we experienced a longing that invited us.

We wanted to make a more meaningful contribution to a world. In our eyes sometimes the world seems to be harsh. Although from a young age onwards we both had a dream of doing development work, we took different turns in our lives.

One day, we had enough. No longer we wanted to just watch it all, sitting on a couch and paying money into giro 555.

We wanted to do something ourselves!”

In October 2010 this strong urge to do something, resulted in a trip to Haiti. This country had just been hit by a severe earthquake. During these impressive months André and Paulien experienced how fulfilling it was to be able to use your heart, knowledge and skills in these kind of extreme and almost unreal circumstances.

When FloJa Malawi crossed their path in 2015, it all fell into place.

Paulien: “This was the perfect opportunity to fulfill our dream”. Our decision to take over the project came natural to us; it was so obvious that we wanted to do this. We radically changed our lives and left for Malawi in order to support a group of almost 90 children.”

So from 2016 onwards up to now, André and Paulien have been living and working in Malawi. The country is one of the poorest in the world, has a friendly population and beautiful nature, but also many very complicated problems.

André and Paulien focus on what they think is crucial for development: education, nutrition and good health for children.

There are people who regard a project like this as the infamous drop in the ocean.  “However, we see FloJa just as a beginning,” says André.

“We believe it’s so important to help children in Malawi . So that they, in their turn, can work to develop their own country and reduce poverty.

We connect with the people who live and work in this country, observe attentively to see what is needed, listen to the problems and find solutions together with the locals.  We strongly believe in community empowerment, with a critical eye for ‘ownership’ and ‘sustainability’.”

And it is our conviction that by such a method a small drop in the ocean can become a well it self... Of course we cannot do this on our own. We  need every possible help.

"Where your talents and the needs of the world cross; there lies your vocation" (Aristotle )